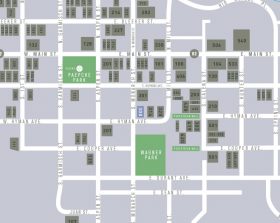 This structure is a typical brick commercial building constructed as the town’s prosperity grew. Brick provided greater fire protection than wood, and indicated a sense of “permanence.”  The oldest part of the building (the western part) was built by S.B. Clark in 1891. Named the Clark Commission Company, it was utilized as a wholesale produce house. In the early 1900s, E. M. Cooper bought the business and changed the name to Aspen Commission Company. The building was later vacant for a period of years, until bought by Mead Metcalf, who operated a dinner theater, “The Crystal Palace,” there from 1959 until 2008. The building has had numerous alterations, including additions to the east and rear which obscure the original character. All windows have been replaced and new storefronts have been constructed across the entire south facade.