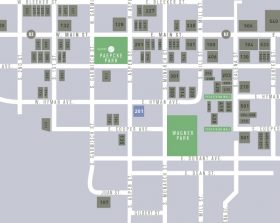 This structure is representative of Aspen’s mining era character. The building represents a typical style known locally as the “Miner’s Cottage,” characterized by the relatively small size, simple floor plan, and front gable / porch relationship. This structure is significant for its position in the context of Aspen’s mining era.  It provides a window into the nature of the life of an average family or individual during that period, as well as the construction techniques, materials available, and architectural fashions of the time.  It is a significant example of the Italianate style, unusual in this area.

The house was originally built for Hugh T. Cameron, a blacksmith and Civil War veteran. Jessie Biggs took over ownership in late 1893 and owned the property for several years. Known as “The House of Providence” when it was occupied by five bachelors with a household maid, the house is most commonly associated with the Willoughbv family. They purchased the house in 1923 and were very influential in the development of skiing in the area. Frances Willoughbv Herron and John Herron occupied the house during the Paepcke era. John and his brothers had originally leased the surface rights of the Durant mine to Paepcke for some of the first ski runs.