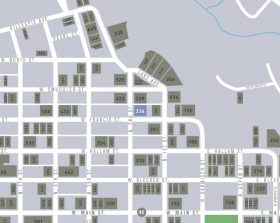 This structure is representative of Aspen’s mining-era character, and was the residence of Davis H. Waite, local lawyer and publisher of the Aspen Times. He was also the Populist Party governor of Colorado, elected in 1893. His term as governor was stormy, with the devaluation of sliver and the economic problems of the time. While in office he enacted the law for women’s suffrage in Colorado, which became the second state to do so. He occupied the house before and after his two year term, and until his death in 1900. His son-in-law was B. Clark Wheeler, to whom Waite had previously sold the Aspen Times. They were also partners in the law firm. Other important residents include Herbert Bayer, noted artist and industrial designer (in the late 40’s), and R.
O. Anderson, chairman of the Aspen Institute for Hurmanistic Studies (from 1953 to the late-8O’s).